Released independently by Blank Studios, the word redux at the end of the song title indicates this is a revival of a ballad from the gipsy-folk and rock band’s best selling Take A Bite album. However, it is much more than that because I’d Give It All marks the debut solo single release of Holy Moly & The Crackers’ charismatic frontwoman, lead vocalist and violinist Ruth Patterson.

Anyone witnessing the band’s raucous live performances will confirm the power and sincerity of Ruth’s solo vocal interlude with piano accompaniment as she bares her soul with amazing courage, conviction and just a hint of vulnerability. This vibe shines throughout the song which whilst only lasting four minutes encapsulates emotions so deep they become embedded in the listener’s heart. Only Beth Hart comes anywhere near the Newcastle Upon Tyne based chanteuse in terms of songwriting acumen, vocal intensity and keyboard skills. 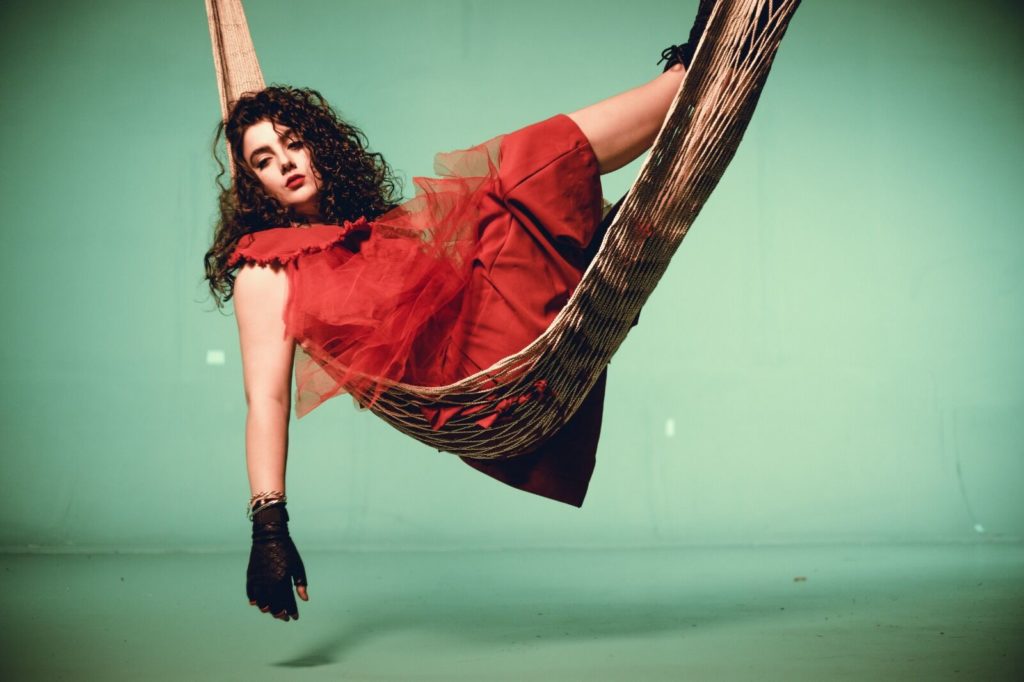 In the same way that Little Girl Blue launched the career of American legend Nina Simone over 60 years ago, Ruth’s inspirational composition has the power to do the same for her. Other similarities include both women being gifted songwriters, arrangers and instrumentalists who initially aspired to be classical musicians and whose music spans a broad range of styles including folk, jazz, blues and pop.

This beautifully crafted love song opens with attitude rather than sentimentality, the emphatic piano chords a precursor to what Ruth doesn’t want. Not for her “the dozen red rose roses laid at my front door” or the fine wine and dining which “sticks in my throat”; and when it comes to diamonds, “well it might as well be coal.”

The strong poetic lyricism of this song is emphasised in the next observation: “And though I know it’s all to please me but the perfume stings. My eyes are not adjusting to the bright lights.” The jazz-inflected vocals and carefully orchestrated atmospheric background string quartet set the scene perfectly for the killer line, “You’ve missed the point babe: love is always silent.”

It is at this point that the chorus takes the words and meaning into another stratosphere as Patterson knows what she needs and is going to take her time to find it. The sumptuous strings and Ruth’s mellifluous backing vocals merge in a series of soaring, subtly layered crescendos as the quest to discover the right kind of love, keeping it and never letting go reaches its climax. “And when I find what I’m looking for I’m gonna run, run, run, run, run away with you.” Rarely has a single piece of music left the listener feeling so energised, empowered and exhilarated.

I’d Give It All is available on most music streaming platforms and is best listened to in conjunction with the surreal, evocative music video by renowned film director, artist and activist Antonia Luxem and cinematographer Tegid Cartwright.

The film complements perfectly the flow and emotion of the music. The underwater scenes are literally breathtaking with the ‘mermaid’ who is unable to walk on land moving confidently, effortlessly and gracefully in a mesmerising aquatic scene.

Track Review by THE BISHOP 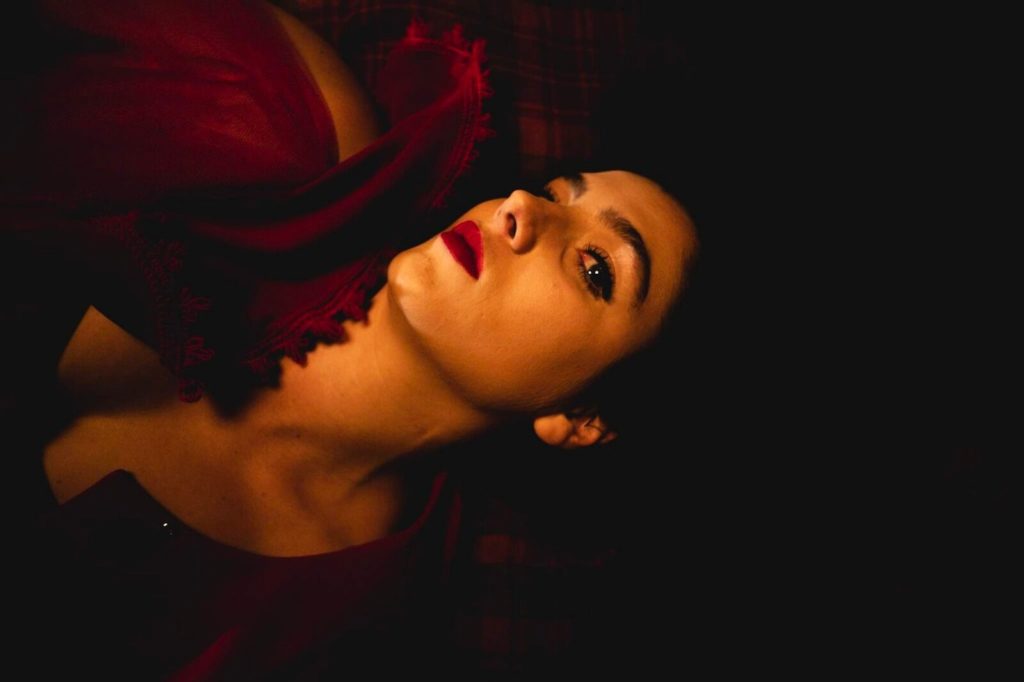 Ruth Patterson Interview about the song, love and the music video

I wanted to re-work ‘I’d Give It All‘ because it has always felt the most authentic track on the album to my personal voice and story, and allowed me to explore and develop my own artistic vision. From orchestrating the string quartet to working with Sam Grant at Newcastle’s Blank Studios and with mixer Gareth Jones in London, we sought to create a warm intimacy and emotive fragility in the soundscape. I think we achieved it. I am a huge fan of Beth Ditto of Gossip, and her song ‘Coal To Diamonds’ was a big inspiration. I wanted to capture that same emotional intensity.

‘I’d Give It All’ is about wasting time with friends or lovers who think that affection is all about ownership, flashy gestures, selfies and about what is seen from the outside looking in.  I had an older boyfriend when I was a teenager and he dressed me up with flashy jewellery, like some kind of prize horse rather than someone with whom he had any emotional or spiritual connection. I remember coming home one day with roses stuffed with diamantes all over my front door with him nowhere to be seen and I knew it was all wrong. He hadn’t come to spend any real time with me, just to remind me who I belonged to.

For me, love is silent. It’s a knowing look, a smile, a joke which nobody else gets, taking your time, painful sadness and the kind of happiness that makes you feel drunk. Most importantly it’s about refusing to settle. Love looks different to every single person but when you find it, in whatever form, you give everything you have to keep it.

Working on the video with director Antonia Luxem was a dream come true. Inspired by my love and study of Japanese avant-garde fashion and underlying philosophy of “beauty in imperfection“, we worked together to explore new ways of having me move on screen to express emotion but without being able to walk or dance in a conventional sense.  As a disabled artist, it was totally empowering.” 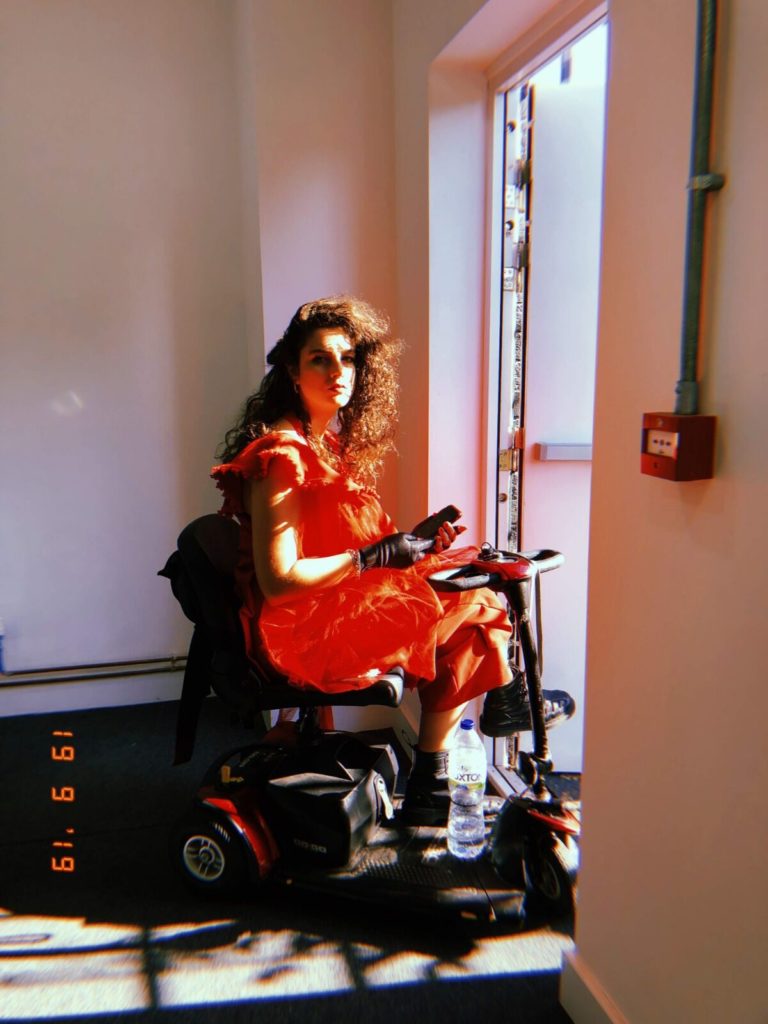 Ruth Patterson is Artist In Residence at the iconic cultural venue, Sage Gateshead, where she will write and develop her debut CD. Ruth is also a regular activist and speaker for the charity Attitude Is Everything which helps fans and artists with disability in the music industry.

The post HOLY MOLY & THE CRACKERS, RUTH PATTERSON I’d Give It All – Redux appeared first on Blues Matters Magazine.