Albert Cummings has released a new song, ‘Red Rooster’ ahead of new album, Believe, which is released on 14 February via Provogue, now available for pre-order (HERE). Be sure to check out our interview with Albert in the current issue of Blues Matters!

Talking about the song hr says; “Putting my spin on Red Rooster was my way of paying tribute to one of the greatest blues writers of all time, Willie Dixon. Its such a classic and has been covered so many times that I was excited to mold it into a version of my own. Recording it in FAME Studio was a dream. The music history that lives in the studio is unsurmountable. It didn’t really hit me until I looked up and saw a picture of Duane Allman standing in the exact spot I was currently standing. Just mind-blowing!”

Recorded at the iconic FAME Studios in Muscle Shoals, Ala., Cummings describes a “queen of mean” as one who can “cut an onion and the onion will cry,” or terrify a grizzly bear.

Cummings takes this release to new heights with the help of GRAMMY Award-winning producer, Jim Gaines (Stevie Ray Vaughan, Santana). Together, they drew inspiration from the rich recording legacy of Muscle Shoals and created a timeless album full of rhythm, funk and soul. “You can hear the difference between this album and my others, and that is the Muscle Shoals difference,” Cummings says of the new project, “If I had recorded those same songs anywhere else, then Believe would have sounded like a completely different album.”

With a career of recording music that spans nearly 20 years, Cummings has built a reputation through his live performance, bringing the audience on a musical roller coaster. He enchantingly brings his guitar alive in ways that have honored him and earned him praise from the King of Blues himself, B.B. King, while others have drawn comparisons to legends like Stevie Ray Vaughan and Jimi Hendrix.

Cummings will tour throughout next year. His dynamic, engaging personality combined with blues musicianship at its finest has created an enduring, loyal fan base worldwide. For the complete list of dates, and more information on Albert Cummings, visit https://albertcummings.com/tour-dates/ 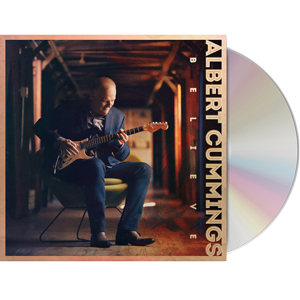