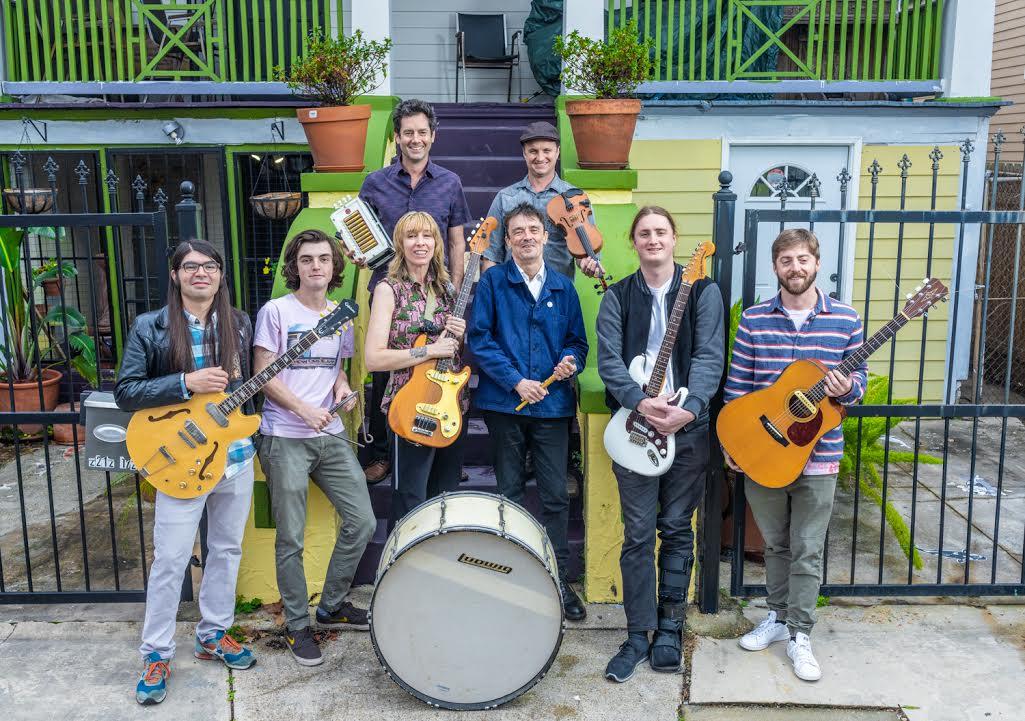 I believe it was Robert Frost who said poguetry is a way of taking life by the throat.

Spider Stacy, tin whistle player/singer of the Anglo-Irish folk-punk band the Pogues, has been playing with the Grammy-winning Lost Bayou Ramblers since 2015 under the name of Poguetry. And cajun music is now the medium through which the Pogues songs are expressed. In 2018 the original Pogues bassist, the storied Rocky O’Riordan, also joined forces with Stacy and the Ramblers, further integrating the sonic elements of the Pogues.

The Pogues’ faculty for blending just the right amount of Celtic folk to punk may seem like a far cry from a band steeped in Cajun traditions. But the penny whistle, ferocity and poetry of the Pogues set to the eclectic instrumentation of the Lost Bayou Ramblers — a band equal insofar as punk-imbued energy — is really a natural progression when you think about it. It only makes sense that members of UK and Ireland’s premier punk band would merge their multicultural sound with that of Louisiana’s premier Cajun band.

The story of how Poguetry came to be started at a place called One-Eyed Jack’s in New Orleans. “We moved to New Orleans.” Spider tells me, fresh from a walk around North London.

“Steve Zahn, who was in the tv show Treme, had a party at One-Eyed Jack’s on Toulouse Street in New Orleans. The Ramblers were playing and I went along. And they were just brilliant. Completely compelling. Within seconds, I just thought if these guys played Pogues songs it would be brilliant. I could see how it would work perfectly. I talked about it for a couple of years, and really it was kind of somebody else getting the wrong end of the stick. A mutual friend, Davis Rogan, who lives in New Orleans was talking to Michot and said, ‘Oh, you’re doing this thing with Spider.’ Because I had said to Davis that I think it would be a great idea to get the Lost Bayou Ramblers to do a set of Pogues songs. That was something I had already discussed. He got the wrong end of the stick. Louis was like, “Who’s Spider?” It kind of fell into place after that. This probably happened in 2015, not long before we did the first show at One-Eyed Jack’s.”

Stacy has been living in New Orleans for 10 years where he feels deeply connected to the city and its denizens.

“We bought our house in New Orleans in March of 2010. A complete eye opener. It’s like nothing we had ever experienced before. There’s all the music and everything. All the things that one would say about New Orleans. They’re all compelling reasons to go there, but it’s actually the city itself and the people that were the most overriding reasons. We moved to an area where we actually found ourselves part of a community, which is something we had never experienced before.”

He continues to tell me how the reception of Poguetry has been and how it continues to grow. “It’s a funny one, really. In New Orleans it’s become something that people know what it is. At the last show we did in New Orleans at Tipitina’s, we nearly sold out. The one prior to that — we had another show booked at Tipitina’s which I couldn’t make — the Ramblers also had a really good crowd for that. Obviously they had people come to see the Ramblers anyway, but I think a lot of that was the Poguetry thing. It was interesting when we did it as a guest thing with the Lost Bayou Ramblers at the Brooklyn Bowl. That was really interesting, because it was almost like a small scale Pogues gig in terms of the audience. I think the more people become aware of it the better it’s going to be.”

Cait O’Riordan and Stacy reunited in 2018 when they both played at Shane MacGowan’s 60th birthday celebration. The special night of music and camaraderie at the Irish National Concert Hall seemed like a good time as any to bring up his latest musical endeavor.

“I just asked her. It was immediately an attractive idea. I said we’re the Cajun band in New Orleans; I told her to check them out. I think she had probably seen stuff on Twitter and Instagram, like the actual gig. She was up for it. Shane’s birthday was the best ground to lay it on, as it were.”

The name Poguetry springs from the Pogues EP title, Poguetry in Motion. Elvis Costello produced the EP in 1986 and also their Rum Sodomy & the Lash one year prior. Another Englishman who produced a Pogues album was co-founding Clash member Joe Strummer on 1990’s Hell’s Ditch. And Strummer actually fronted the Pogues the following year.

“He did, and he also played guitar twice on a European tour and a North American tour, prior to producing Hell’s Ditch, when Philip Chevron was ill back in ‘89, I think it was. And of course we did Straight to Hell with him as well.”

Stacy looks back on that time now as a one-of-a-kind experience having performed both Pogues and Clash songs with the patron saint of punk. “It was kind of brilliant, really,” he warmly recalls.

“It really was. I love The Clash. To actually have Joe in the band was great. I can really only play the fanboy here. Oh, look. It’s Joe Strummer on stage, with us. At one point, I remember — I think we were in Paris — I don’t know if you’ve ever seen the picture sleeve of ‘Fairytale of New York.’ It was originally a photograph of Sammy Davis Jr. looking out of a window, overlooking 3rd Avenue in New York. He’s got a glass of whiskey in his hand. What they did was crop Sammy out and put me in the same pose holding a shot glass. We made it into a shirt. We were doing this show in Paris or wherever and I just happened to notice there’s Joe Strummer on stage with me on his T-shirt.”

My favorite Pogues song has always been “Boys From the County Hell.” Something about the spaghetti western banjo intro, the attitude in Shane MacGowan’s sonorous vocals, and the dulcet shriek of Stacy’s tin whistle throughout the whole thing. So I had to know if that was one Poguetry included in their set. “We do. And there’s no whistle because I’m singing it.”

Poguetry will embark on a tour in the U.S. starting at the end of February and ending in the middle of March.

“I’m looking forward to it. It’ll be interesting. We did the thing in Brooklyn with the Lost Bayou Ramblers back in August. We’ve taken it out of New Orleans. Prior to Cait being involved, we did a couple shows in Texas and then we had a small run. We played places like Monroe, Louisiana. We played Little Rock and Birmingham. That was properly organized, but this has a little more organization behind it. We’re possibly slightly more established now. It’ll be interesting to see how it goes and how the crowds turn out.”