It is significant that Green Note in Camden, near to where Sean Taylor resides, should provide the setting for a Live In London album representing the pinnacle of his musical achievements after two decades as a road warrior. The intimacy of this iconic venue (Taylor’s spiritual home), and the presence of family, friends and fans who packed the place to the rafters, makes it a special night. 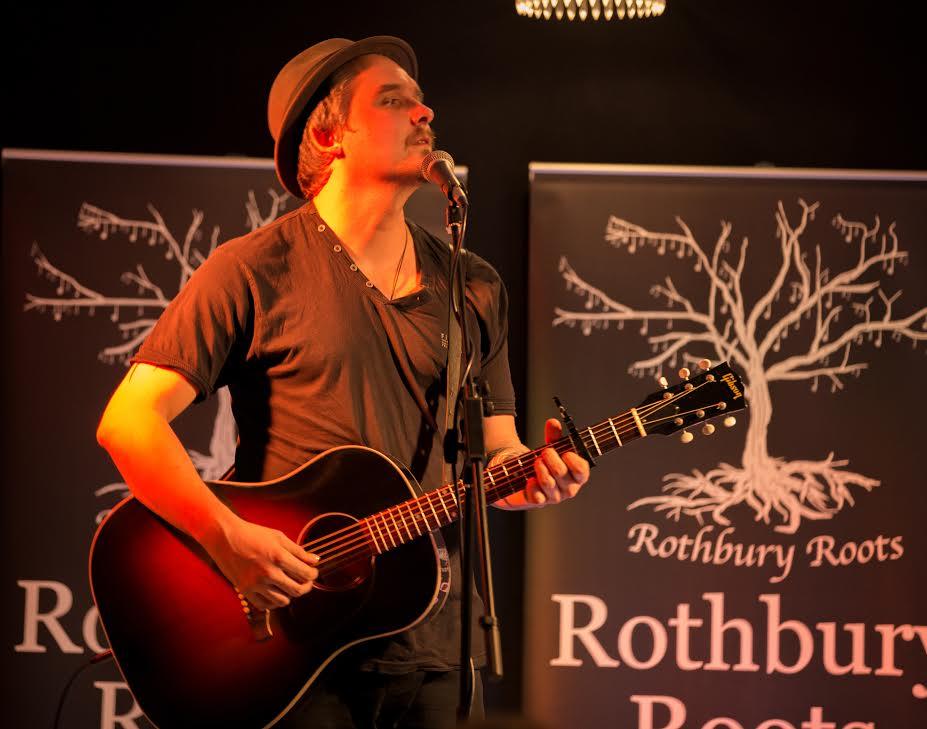 With a guitar on his back and an old fedora hat, the troubadour walks nonchalantly onto the stage and launches straight into “Heaven” with its trademark fingerpicking, mesmeric strings’ accompaniment and hushed vocal tones. “Texas Boogie” hits that groove instantly and is a perfect tribute to the blues greats Lightnin’ Hopkins and Stevie Ray Vaughan. The slow, anthemic opening to “Little Donny” is the prelude to a candid critique of the President of the United States, the crescendos and changing pitch of vocals intensifying the anger. But the UK doesn’t escape political activist Taylor’s wrath either. ‘”This Is England” is a spoken word stream with evocative guitar accompaniment exploring life today, and English identity in this broken generation: “Write me a jingle with a million hooks, WhatsApp me Mr Shakespeare ain’t no time for your books.”

The blues-infused “Hold On” highlights the best of the peace and justice campaigner’s songwriting acumen, nimble finger-picking, percussive guitar work, and soft, mellow vocal delivery. The intriguing mantra of the words  creates a calming effect, the chorus being as relevant in today’s virus-stricken world as we all seek to hold on in these difficult times — whatever happens. Every word sung in this show is enunciated and heard clearly thanks to the crystalline sound quality, benefitting the gentle, balladic “Perfect Candlelight” from the 2009 Walk With Me album which is greeted with rapturous applause. The response to the popular and atmospheric “Calcutta Grove” is equally generous. Taylor possesses the chameleon quality of switching suddenly to gritty and powerful vocal delivery as on the upbeat “Feel Alright.”

Sean’s blues hero, Skip James, is acknowledged with an innovative interpretation of “Hard Time Killing Floor Blues,” and the first opportunity for the audience to sing along. “The Only Good Addiction Is Love” is a beautiful slow ballad based on a quote by former Uruguayan President ‘Pepe’ who gave his money to charity. The 2015 album of the same name was a game changer for Taylor in that it confirmed his status as a poet, all-round musical virtuoso and Renaissance man alongside his other musical credentials. Sean intricately finger picks his way through the Spanish-influenced instrumental “Lorca” before subtly moving on to “Heartbreak Hotel,” the latter sounding nothing like Elvis as it is given an intelligent makeover. Also unique is the haunting, rapid pace of “Nightmares” with its spine-tingling repetition of “I know she’s gone” creating an eerie vibe. Sean’s previous album, The Path Into Blue, was highly acclaimed for its sincerity, passion and poignancy — none more so its title track dealing with mental health issues which tonight is dedicated to World Mental Health Day, the date of this concert.

Another highlight is “So Fine’” with its dazzling guitar intro and funky rhythm is one of Taylor’s finest compositions, the lyrics reminiscent of Paul Simon at his peak. The aggression, heartache and anger in “Stand Up” with its piercing harmonica and stomping backing are reflected in the words, “Wipe away the poverty, wipe away the greed / I’d rather die on my feet than live here on my knees.” Dedicated to the Extinction Rebellion movement, it is a reminder that Taylor has a social conscience and strong beliefs. He genuinely cares, so he will not sit back in the face of austerity, global environmental issues, injustices and corruption. “Troubadour” is a personal story of life on the road where Sean has spent most of the past 20 years. Sean is not allowed to leave until after an encore, so he obliges with two instrumentals, “Basho” and “Anji,” before ending with the aptly named “Hit The Road Jack.”

Appropriately, at this stage in his career, Sean Taylor has by definition delivered his best album yet, because it is just the man and his guitar “at home” singing his best songs to the people he loves. History will judge Sean as one of the most influential musicians of his generation. He tackles contemporary issues including austerity, climate change, depression and disasters of Grenfell proportions with truth and integrity while offering hope in the pursuit of truth, peace and love. Listeners of this album will hear the blues in many of the challenging themes covered as they pierce the heart and soul of humanity while demanding a response. This live compilation propels Taylor further towards membership of the pantheon of elite musicians, alongside Dylan, Cohen, Van Zandt and Martyn.

HOW THE CORONAVIRUS PANDEMIC IS AFFECTING SEAN TAYLOR

With loads of musicians losing huge incomes from cancelled tours and gigs, American Blues Scene asked Sean to assess the impact of this awful virus on their livelihoods. We also asked him what steps he had taken to continue promoting his music and engaging with the fans.

Like many artists, venues, and promoters I will be losing a lot of income. I have lost at least two months of tour work already and by the looks of things probably more. This is an unprecedented time, and it is going to get tougher for everyone. There is no safety net for musicians and as a workers’ movement we must be united in calling for collective worker protections and support. It is also very important to remember that as musicians we all have a duty of care to the beautiful people who support the music. We should be following the world health organization’s call for social distancing, Offering support for musicians and venues that cancel events to protect the public health is crucial at this desperate time.

I have released a Live in London album that I am selling via my website to get by and the response has been beautiful. I was only going to sell this album at concerts, but I have lost a lot of work and I have to try and survive.  I have been writing a lot which I do anyway as it’s my job. I will look into livestreaming gigs, but the road is my home and I miss it already.